Talk about signals ranging from wigwags to EVA signals here.

NSrailfan4life wrote: A Aussie I see. Nice to meet ya! Great find! :)

Why thanks. Since we get stopped at that crossing quite a bit, I thought it would be interesting to take note of that crossing. BTW, it was also the first crossing in my area to get E-Bells. Cardinia Road also got E-Bells in June of this year as part of a road duplication project.
Metro, why do you keep removing Mechanical bells?!

Another crossing historical analysis, this one's at Ramsden Street in Clifton Hill, Victoria.
Here's the crossing in 1978. (Photo taken by Peter J. Vincent) 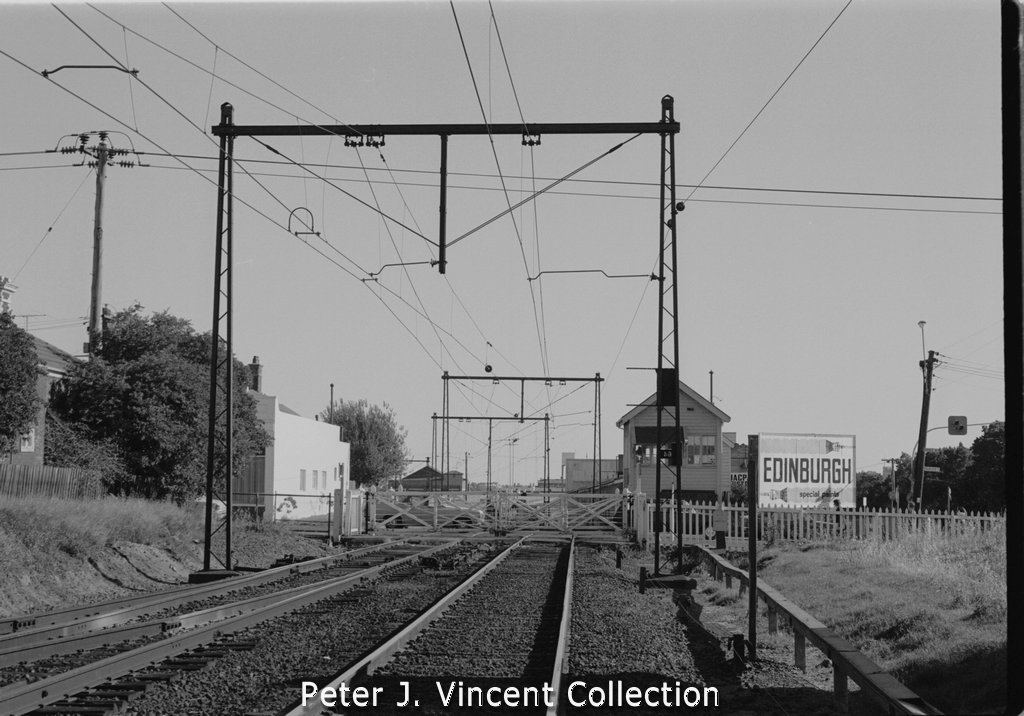 As you can tell, it's got wooden interlocking gates.

The signals seen here were installed in 1992. They've got Westinghouse gate mechanisms, Westinghouse lights, and Barker Technics E-Bells. As you can clearly see, the old hand gates have been statically preserved at this location. (There's other locations around Melbourne where they've persevered them too...)
Metro, why do you keep removing Mechanical bells?!

Sorry for the bump. 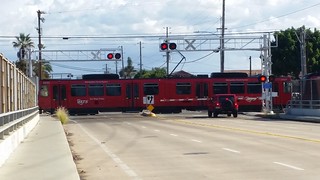 Crossing history: This crossing was one of the many to be upgraded because of the blue line project.
Top

No need to apologize!

No need to apologize!

Found a few old photos which have Pakenham line level crossings in them on the Casey Cardinia 'Links to our Past' blog.

First off, is this picture was taken by The City of Berwick on July 29, 1987 showing the aftermath of flooding. 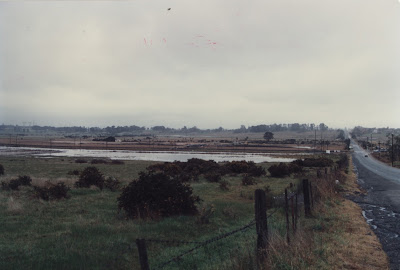 Click here to see a larger version of this image.

You can make out the Hallam level crossing in the background on the right side of the image. You can't see any of the equipment, but I imagine the equipment is the same as it is today (which I'll get into shortly). 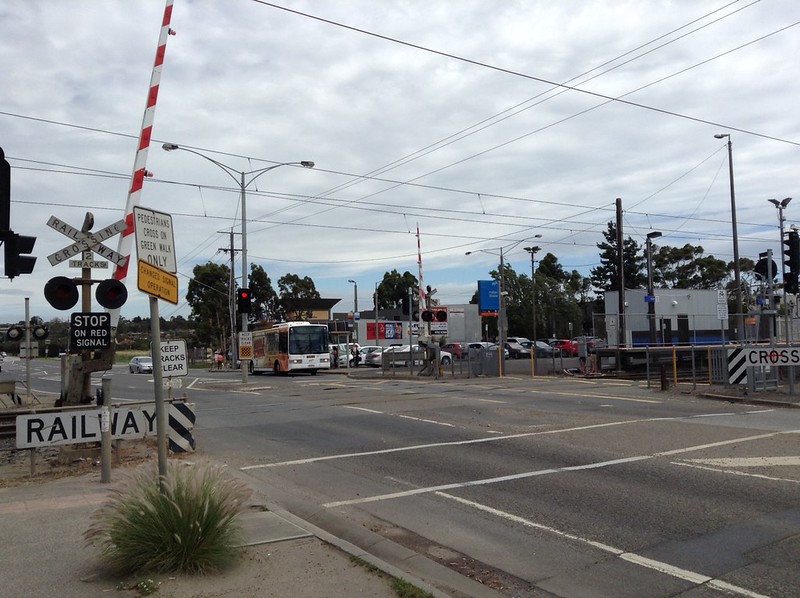 Aside from the red & white gates, an LED upgrade in 2006, and the original Westinghouse pedestrian boom barrier mechanisms being replaced with swing gates in late 2014/early 2015, this crossing still has the same equipment seen in that 1987 photo! Honestly, this is quite good for crossing that's over 30 years old.

However, there's been a major change in the landscape around the crossing. Over the past thirty years, the empty fields and paddocks around the road have been replaced with commercial and industrial buildings.
https://www.google.com.au/maps/@-38.017 ... 312!8i6656

Here's an old scan of the area from the 1987 edition of the Melways.
https://digitised-collections.unimelb.e ... quence=129

You can see that the nearby suburb of Hampton Park has already developed quite a bit at the time, but the area north of Centre Road had yet to built up.

Before we move on, here's two bonus pictures taken by Weston Langford showing off the inaugural suburban service from Pakenham approaching the station & level crosing in 1975. At the time, this crossing was gateless and had a McK&H Teardrop bell.

The next crossing is on the site. Located at Webb Street, Narre Warren. Here's two pictures of the said street from the early 1990's (according to the blog, the first image is from 1992), you can see the crossing in the background. (The street name comes from the Webb family, early settlers of the area) 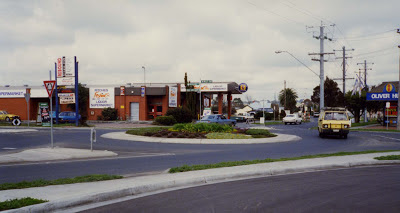 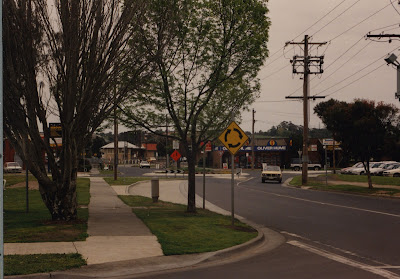 Click here and here to see larger versions of these images.

From what we can make out, this crossing had black and white gates and McK&H gate mechs (pretty much the same as the WRRS ones').

Another crossing on the opposite side of the current station used to exist (Cranbourne Road), but was replaced with an underpass in 2004 (with the road widened at the same time).
https://www.google.com.au/maps/@-38.028 ... bfov%3D100

Now, I did a post on the McGregor Road, Pakenham crossing earlier in the thread, but I found a picture of this crossing from 1983 taken from where the old shires' offices are. (Excuse the size of the image) 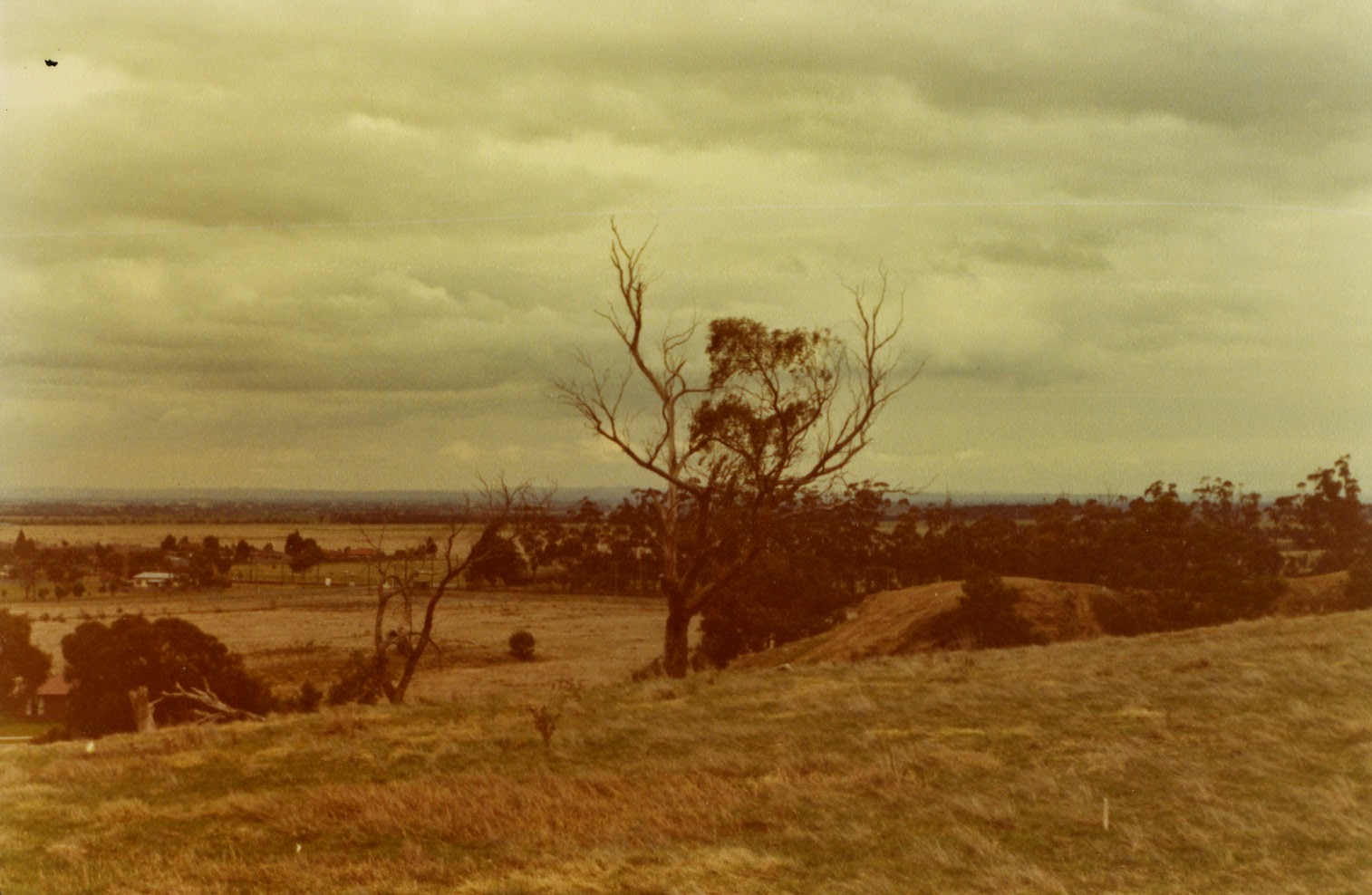 You can make out the crossing in the background on the left side of the image. At the time, this crossing was only a flashing lights setup (installed in December 1974).

The current boom gates were only installed three years after this was taken, but this signal was reused from the previous setup.
https://www.google.com.au/maps/@-38.078 ... 312!8i6656

The area south of the rail line and the McGregor Road crossing didn't start developing until around the early 2000's. You'll also notice that Cardinia Road was also marked as 'Unsealed' and a regional cemetery was also proposed nearby at the time.

Just last year, the road was duplicated to four lanes (two in each direction). This saw the previous setup (dating back to 1986) replaced with brand new signals. 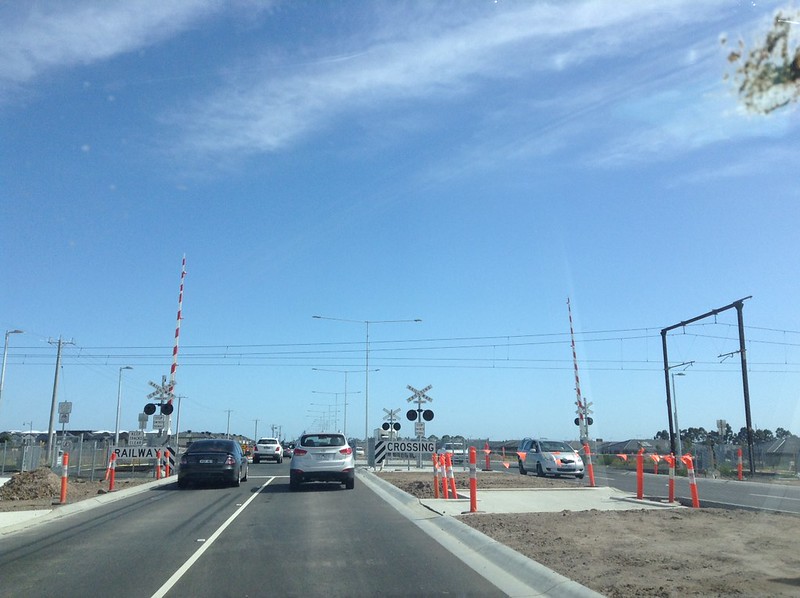 That's all I've got for you today!
Metro, why do you keep removing Mechanical bells?!

Found some interesting pictures of some Melbourne-Sydney line crossings from around 1987-ish on Peter J. Vincent's site. He's pretty much a VR historian and has loads of cool images of VR rollingstock, trains and related infrastructure. You can visit his site here.

One picture I found is of High Street, Barnawartha. 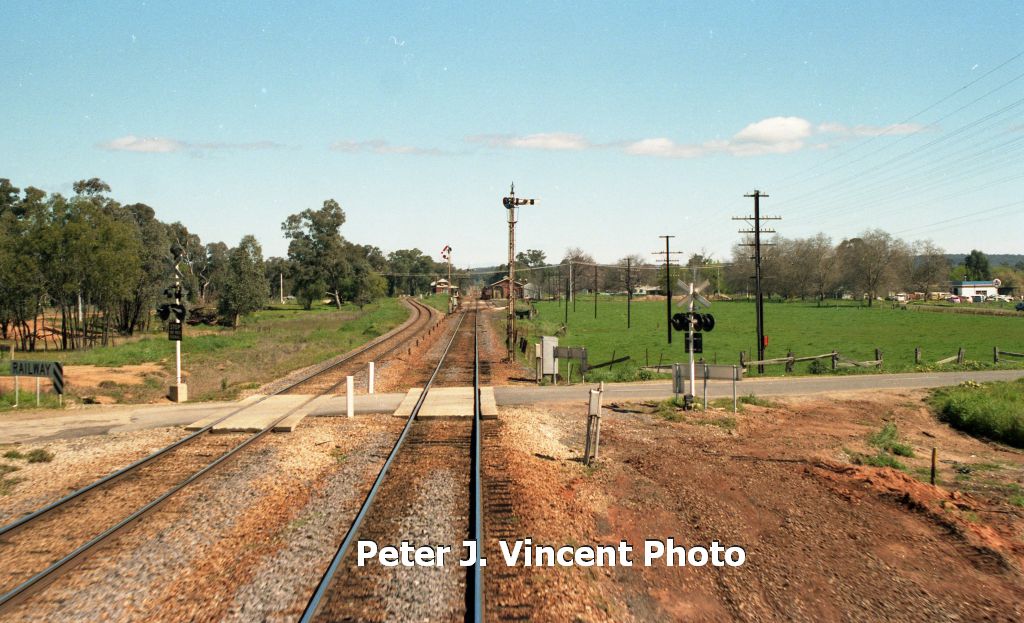 Here's the crossing today, aside from an LED upgrade and the updated SORS signs. The crossing is essentially the same today! Only problem, it's slated to be upgraded with gates in the not to distance future. 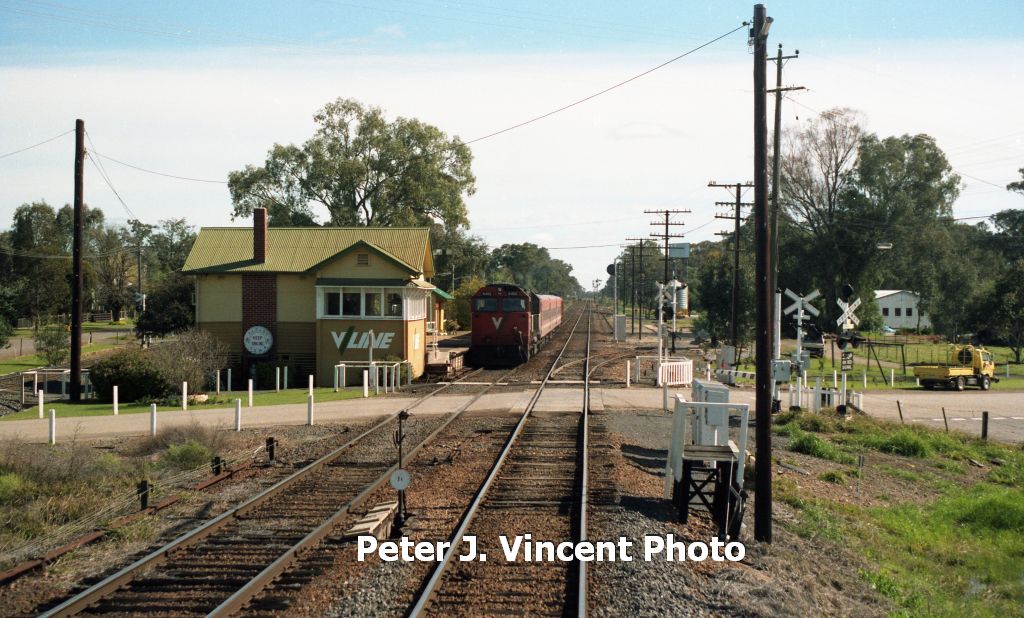 As has been mentioned on the fourm before, more changes have happened since that image was taken. The other teardrop was replaced with a hybrid, the WRRS mechs replaced by Safetran mechs, and presumably the crossing has an LED upgrade since.

Finally, we have Nunn Street, Benalla. 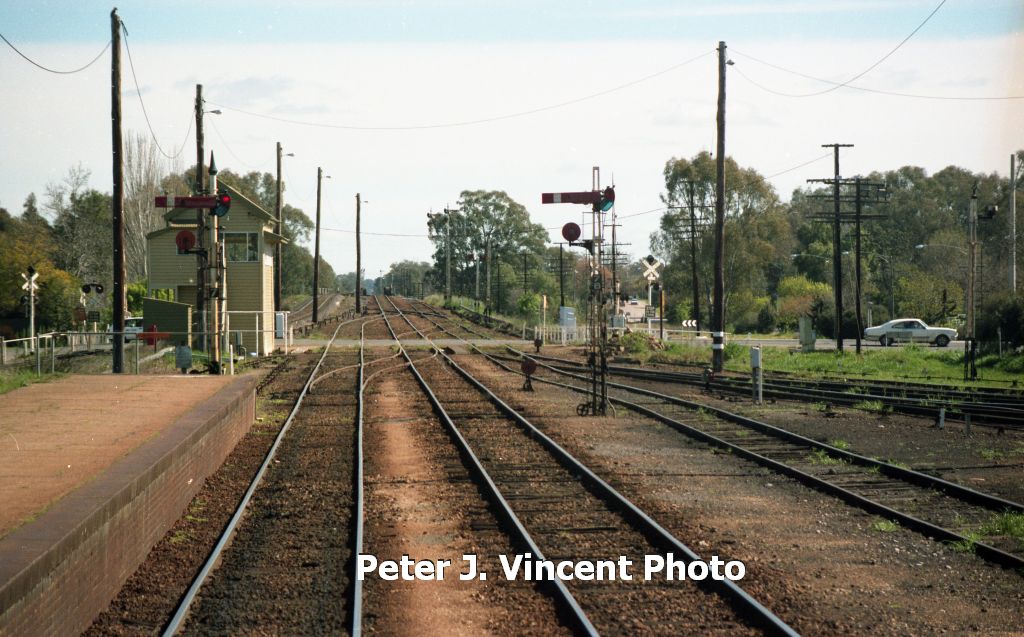 When the picture was taken, the crossing had McK&H lights, WRRS gate mechs, B&W wishbone gates, and two McK&H Teardrop bells (much like Cowslip Street).

Here's the crossing in 2015, aside from the LED upgrade, the flat gates, and one of the Teardrops being replaced with a hybrid, the crossing remains the same!
https://www.google.com.au/maps/@-36.545 ... 312!8i6656
Metro, why do you keep removing Mechanical bells?!

I seem to be the only one posting these things.

But anyways, I thought I would do another Historical Analysis on some crossings.

Our crossing for today is Robinsons Road at Deer Park. This picture taken by the late Weston Langford on September 26, 1987 shows a 'Superfreighter' led by V/Line locos X48, S308, and Australian National 930 class loco 939 crossing at the said location.

According to this document, the gated signals seen in the picture (well, only one is shown) were installed on January 29, 1981 and replaced gateless signals installed on September 11, 1969. The equipment on the signal shown consisted of a Westinghouse(?) base, Westinghouse gate mechanisms (among the first installs to use them), Black stripped wishbone gates (all new installs used them at the time), Westinghouse lights (incandescent), and a Westinghouse hybrid bell (probably one of the first installs to use them). The other signal had the same equipment.

The same signals shown in that 1987 image are still present. However, the crossing now had Safetran gate mechs, Westinghouse LED lights, and General Signals e-bells (type unknown, but likely type 2). Also note there's much more houses in the area.

But in late 2013, the crossing received a major overhaul with brand new signals and an actual proper pedestrian crossing at the location as part of the Regional Rail Link project.
https://www.google.com.au/maps/@-37.772 ... 312!8i6656

Additionally, they now have the newer style red background crossbucks, "2 Track signs" and a variation of the white SORS signs (the normal ones are more narrower).

Finally, I thought I point out where the three locos seen in the picture are today. X47 is still in service today with Pacific National, S308 was withdrawn in 1988 and now resides in the ARHS Rail Museum in Williamstown North still bearing the old V/line livery, and 939 has since been scrapped.

That's it for today!

Metro, why do you keep removing Mechanical bells?!

That's actually pretty standard on the BNSF of many of their crossings. I think they were still using those conversion brackets into the early 2000s.
There should be a legal limit as to how humid it can be on any given day during the summer here in the South...
Probably a furry.