Iowa River Railroad was: A Resurrection From the Dead

Can't have signals without railroads, so talk about your favorite locomotives, railroads and any other (non signal) railroad related stuff.

Iowa River Railroad was: A Resurrection From the Dead

Unfortunately, I don't know exactly. I'm just going by what I've read off newsgroups and what not. I would have loved to have followed the line better the past few years, but between job layoffs and where I'm at right now trying to get back on track, getting up there more often just hasn't been possible.

What I don't understand though, is that they seemed to have enough business to at least keep the track to United @ Eldora. (Unless for some reason the plastics plant couldn't send/receive cars at all off the CN line.) But again, perhaps that comes down again to the mentality that they really only intended to purchase the line for salvage value and to serve the plant only.

I think we've gone way off topic in this thread... probably best to move this part of the conversation elsewhere. Sorry about that MG. I didn't mean to steal your thunder.

From what I remember of the STB filings United Suppliers (fertilizer manufacturer) in 2008-10 held steady to dropped in carload freight (tanks). Eldora Plastics increased slowly (covered hoppers of plastic pellets as I recall). The Union Elevator I think was steady to dropping some. FS Albion went from 0 to making up any drop in US's and the Union Coop's business. I think they called total carloads on the abandonded section steady over 2008-2010. What the STB commented on was 2011 business was not included, they wondered about that since the filing came in 2012 and 2011 data would have been available. There was a flurry of traffic for the last couple of months before the track embargo in Dec of 2011 so I'm assuming the 2011 data would have showed a nice increase in carloads because United Suppliers, Eldora Plastics and FS were making sure they had full tanks while they had the chance, maybe the increase was longer/larger than that and that wouldn't bode well for an abandonment but that's speculation on my part. As I recall it was also United Suppliers that made the loudest stink in the media that they would be closing in Eldora because of the loss of rail service too, and their siding was the first one pulled to my knowledge. Before Liscomb and Albion (by the old depot location).

I wouldn't see any reason why the couldn't switch US or EP from the CN side, they'd have facing point switches at both US and EP but their was a nice double ended siding in Eldora by the county shed that they could have used for a run around and pushed to US and EP. It's alot shorter run than Liscomb to Marshalltown and they made that push at times. http://www.rrpicturearchives.net/showPi ... id=2604288 That pic looks like tanks for United Suppliers to me going south through Eldora. If they came from Marshalltown they could just backed them in the siding on 3004's way north. It's a trailing point switch moving north, they'd have no reason to go into Eldora itself if they came from Marshalltown. I think you are right about the mentality of the ownership. I haven't researched it but I do hear the scrapper owner has a history of investing in lines and saying he's gonna replace ties and improve the line. He doesn't invest in infastructure(ties) and gets scrapping rights (either the contract or a increased percentage than his ownership %) as part of investing. He doesn't have an interest in growing the line's business. His interest is in scrapping IMHO.
Top

I'm curious if that's why any deal to purchase the line couldn't be made recently either... The ownership's push to just scrap the line for money. It's very obvious there was business opportunity on a good portion of the line. A good businessman would make a push to grow on that.
Part of me also wonders how much pull the trail people have behind the scenes as well... if they also might have had a hand in making the pot sweeter for the scrapper to rip rail, or make it tougher for a sale to be possible.
I wonder if consideration could have been made for a joint rail/trail, seeing that usage was lighter South of the plant.
Well,

I had talked to the guy who did rail consulting for IARR at startup. He claimed their were several missed opportunities for additional business on the line that were not taken. He and management didn't get along and he eventually left. How serious any opportunities were and if they were enough to pay for themselves I don't know, but I'd have thought trying at least one would have helped.

The trail portion is..... interesting too. If they get their grants IARR gets $750-800k for the line plus their scrapping $. Harden county agreed to be the sponsoring agency for their portion in March. Marshall county wouldn't do it, they were worried about being stuck with the bill in the future and pleaded poverty. The city of Marshalltown ended up being the sponsoring agency on the Marshall section of the line claiming they wouldn't get stuck with the bill. But after the trail has been there a year or so I'll bet the only portion that gets much use is Marshalltown to the Iowa River Bridge, maybe Albion IMHO. The rest won't be used much. Marshalltown isn't Des Moines and Albion/Eldora isn't the suburbs, there aren't that many people. Yes I'll use the trail, once or twice to get better pictures of the bridges for modeling purposes but that's it. I'd much rather it be a working rail line. Some will ride it once in a while, but mostly it'll be like the trail from Holland/Grundy/Reinbeck trail. How much use does that really get? And it doesn't flood like the Steamboat/Marshalltown line does. Given their problems with the Marshall county section I don't know what that means for the real pull of the trail proponents.
Top

It's too bad IANR couldn't have been the one to purchase/operate the line instead.
I see T. Scott Bannister's name on everything for the legal... and I found a section about him on IANR's own website.
Somehow I can't help but think had IANR bought the line, or at least had been contracted to run the line, there would have been much more business opportunity for cooperatives... and honestly, it could easily have opened up better buying opportunities for the plant as well.
I couldn't help but hope maybe they were one of the possible buyers when people were bringing up shop talk purchasers...
Well,

I saw that too and hoped at the first filing it was a good sign. It didn't turn out that way.

Dan Sabin is a smart man and tries hard to drum up business and runs a good outfit. Either he saw something we didn't(which wouldn't be hard for me anyway

), he had too much other stuff on his plate (Belmond to Forest City) or IARR ownership was bound and determined not to sell. I would have loved to see the IANR running that line, they could have made it work if anyone could.
Top

Apologies for the necro, but I realized I never shared these here. In June 2014 I happened to be in central Iowa and found that the ex-M&St.L tracks had been removed through Steamboat Rock, but the signals still remained at the time. 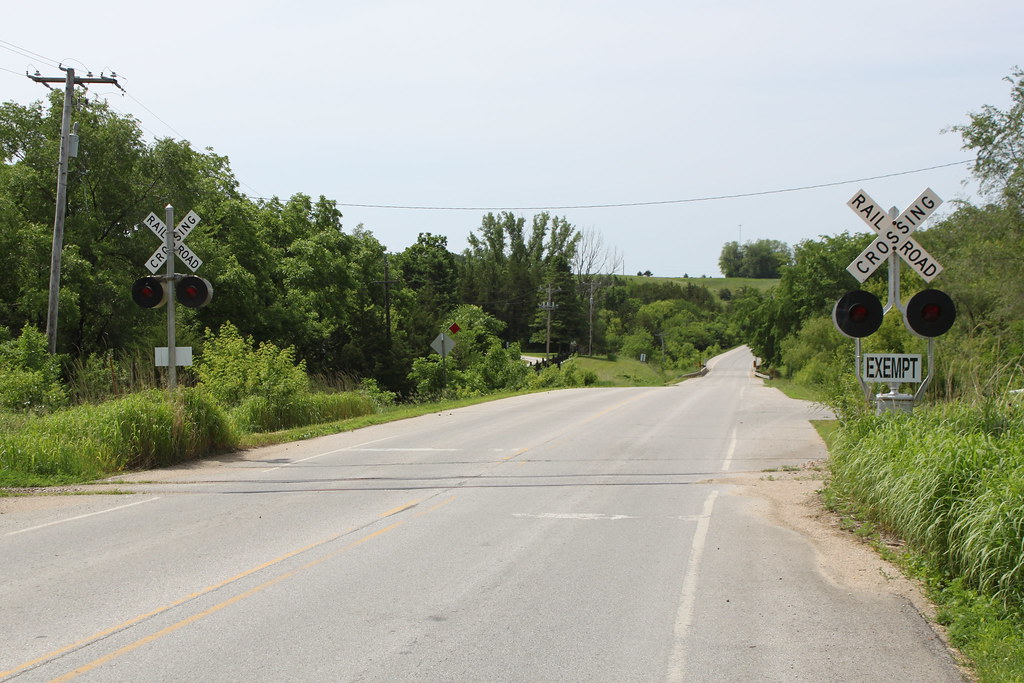 Southbound signal on S56 in Steamboat Rock, an old M&amp;St.L Griswold by Andy, on Flickr Back side of the Griswold signal by Andy, on Flickr The northbound signal on S56 in Steamboat Rock by Andy, on Flickr Wide view looking north on S56 by Andy, on Flickr Looking west along the cleared right-of-way by Andy, on Flickr 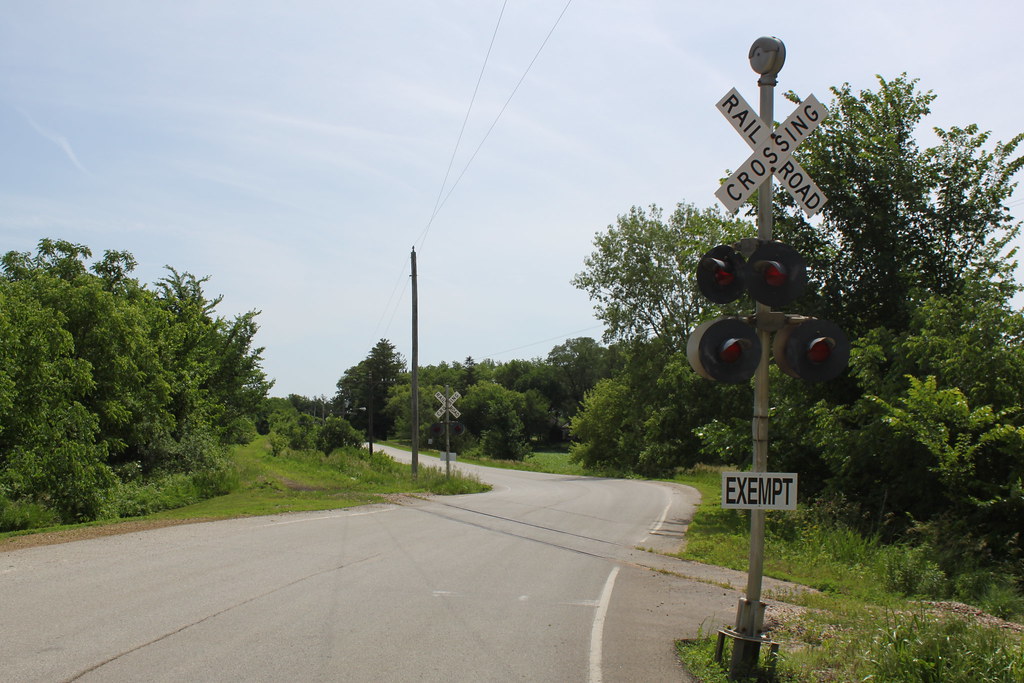 Main St. (D35) crossing on the ex-M&amp;St.L looking east by Andy, on Flickr The eastbound crossing signal on Main St. in Steamboat Rock by Andy, on Flickr Looking east as the right-of-way parallels the road by Andy, on Flickr Looking west at the right-of-way heading into town by Andy, on Flickr Rear view of the eastbound signal on Main St. by Andy, on Flickr The northbound signal on S56 north of Steamboat Rock by Andy, on Flickr Side view of the northbound Griswold signal on S56 by Andy, on Flickr Looking northwest on the right-of-way across S56 by Andy, on Flickr Also looking northwest along the old M&amp;St.L right-of-way by Andy, on Flickr 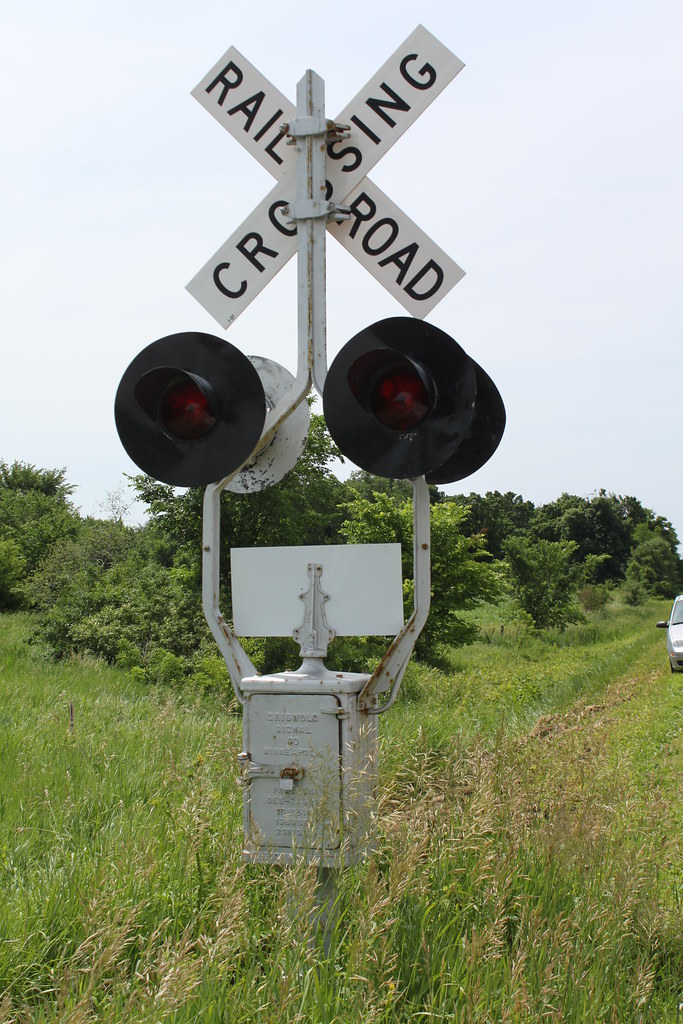 Back view of the Griswold signal for northbound traffic on S56 by Andy, on Flickr Back view of the Griswold signal for southbound traffic on S56 by Andy, on Flickr Also looking southeast along the old M&amp;St.L right-of-way by Andy, on Flickr Glad someone got photos of those before their removal.
I like crossing signals. Do you?

Sad to see those signals get taken out, considering how nicely they cleaned them up to restore them back to service in 2007.
Too bad it was a salvage company that spearheaded the purchase of the line and realistically was only interested in servicing the first few miles from Ackley to 1 mile or so South of the ethanol plant.
Well,